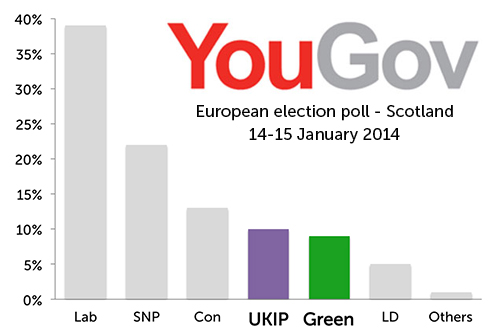 YouGov’s first poll for the European election, released this morning, shows there’s a neck-and-neck race between the Greens’ Maggie Chapman and UKIP for the last of Scotland’s six Euro Parliament seats.

The poll puts the far-right party in second place on 26% UK-wide, likely to cruise to multiple MEP wins in every English region, but in fourth place on 10% in Scotland, with the Greens just a single percentage point behind.

“The winning post for this election will be about 10%, and with the Greens and UKIP neck and neck, the first to that line is likely to shut out the other. By voting Green in this election, Scots have the opportunity to make this the one place where UKIP falters. We can show that Scotland is a staunchly progressive nation that will not be seduced by their politics of selfishness and hate.

“A vote for the Greens’ Maggie Chapman is a vote for a Scotland that welcomes and values new Scots, that makes the banks pay for their crisis instead of blaming their victims, and that rejects nuclear weapons and warmaking in favour of co-operation and peace. It’s also a vote for an immigrant feminist – the ultimate slap in UKIP’s face.”

Scotland was found to be the strongest part of the UK for Greens, ahead of even London, which has twice elected current Green MEP Jean Lambert. Scotland is also the only part of the UK in which the Greens are ahead of the Liberal Democrats, who are polling just over half the Green vote at 5%.