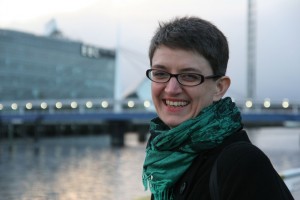 Maggie is the Scottish Green Party co-convener and the party’s lead candidate for the 2014 European Elections. She is a Councillor for Leith Walk ward in Edinburgh, having been elected in May 2007.  Maggie is passionate about democracy and believes that Scotland needs to reinvigorate its politics by opening up to communities.  She spear-headed the community participatory democracy project, Leith Decides, and wants to see local people given more power over the decisions that affect their lives.

Maggie is also an active anti-cuts campaigner and peace activist, and was the first politician in Scotland to support the living wage.  She teaches geography and environmental ethics at Edinburgh Napier University, where she is a member of the EIS Union Executive.  She comes from Zimbabwe, and in her spare time enjoys playing the fiddle and exploring Scotland.